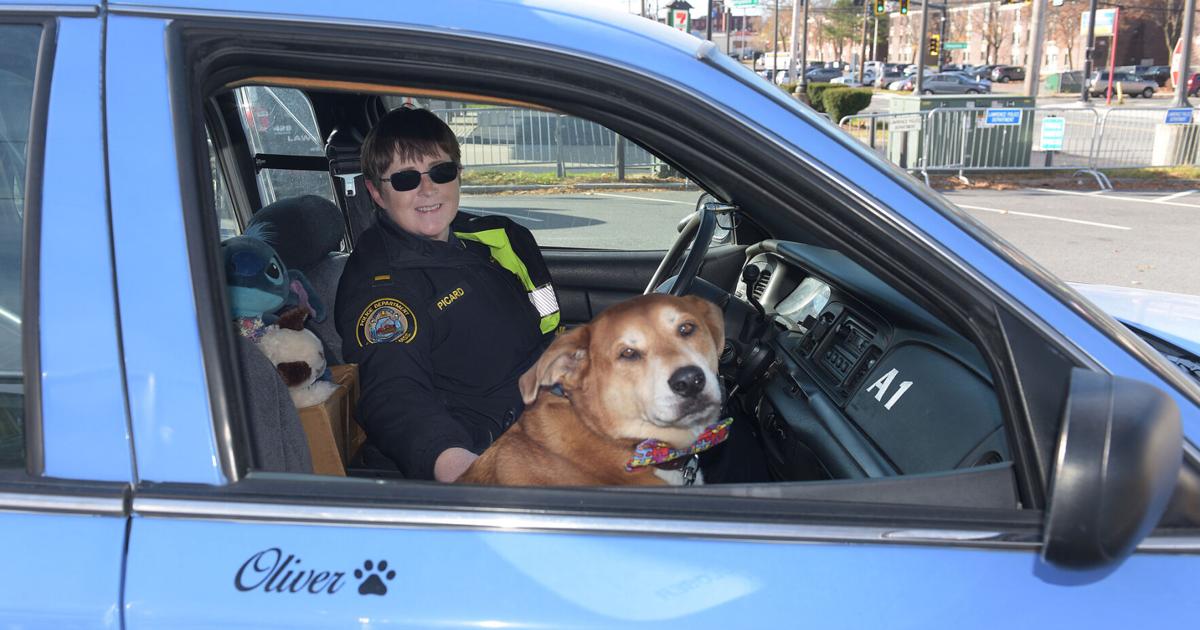 LAWRENCE — Oliver is friendly and cute, his most prominent feature being his smile.

“Ollie just loves being with people. When he smiles, you smile. You can’t help yourself,” said Lawrence Police Lt. Sandy Picard, his devoted handler.

Some police dogs are trained for search and rescue or to sniff out drugs and bombs.

But weighing in at 58 pounds, Oliver, age 7, is all about love and tenderness.

A certified therapy dog, he makes weekly hospital visits, is a captive audience with children learning to read. Sometimes he shows up in a tragic or tense situation to help make everybody feel a bit better.

Last weekend, Oliver was a more-than-welcome guest at a Friendsgiving Banquet with Till Springboard, a social group for adults with various learning abilities, including autism, William’s syndrome and Down syndrome. The group is based in the Boston area but welcomes members from all over Massachusetts.

Sixty adults attended the Friendsgiving Banquet and they all enjoyed Oliver.

“He brought joy to so many faces,” said Nicole Leontakianakos, a Till Springboard leader. She said she could definitely see how Oliver could be a pick-me-up in a difficult setting or situation.

On the job for 31 years, Picard was previously a department canine officer and had a German shepherd. She’s also worked as a patrol officer and in Information Technology for the department.

Looking for a pet, she rescued Oliver when he was just two months old from Mississippi. A cross of mostly Bassett hound and husky, Oliver or “Ollie,” as she calls him, is considered a supermutt.

As a puppy, she described Oliver as a “little escape artist.” His tendency to bolt required her to install an electric fence.

Then, when her mother, Janet, became sick, she soon realized Oliver had other superpowers. At the rehabs her mother stayed in, Oliver was a natural and calm visitor.

He wasn’t afraid of the wheelchairs or the walkers, or even the sounds of electric hospital beds. Everyone said he’d make a great therapy dog. He’s now licensed through Therapy Dog International.

Even after Picard’s mother died, Oliver continued his therapeutic duties. Once a week, he and Picard visit Tewksbury State Hospital.

“Oh my God, they just love him. They all want to stop and play with him,” she said.

He also worked closely with middle school students in Andover in a reading program. Week after week, the students would practice their skills by reading out loud. Oliver would be right there alongside them.

At the end, Picard said it was so great to listen to the children read with such confidence and higher skill to Oliver.

A survivor of intestinal cancer, Oliver also has had his own struggles. He underwent surgery and completed five rounds of chemo.

He’s a patient of Bulger Animal Hospital on Route 114 in Lawrence and also has specialists. Picard feeds him chicken and rice, which she makes, and also throws in some steak at times.

While Oliver belongs to her, the dog participates in many community outreach events with the department. Picard said she’s grateful to have the support of police Chief Roy Vasque.

She said Oliver has a unique bond with those who have different learning abilities. Some are shy or afraid when they first encounter Oliver, “but then they are hugging him and squeezing his face.”

The public is invited to follow Oliver’s page on Instagram olliemutt. To request a visit with Oliver, email Picard olliemuttis1@gmail.com.

For more information on Till Springboard, check out tillinc.org.